This article is for those new to building a desktop computer or are looking into upgrading/adding a GPU in the PC to enjoy a better PC Gaming experience. This article aims to give you a better understanding of ZOTAC GPUs and of GPUs in general. Let’s get started. 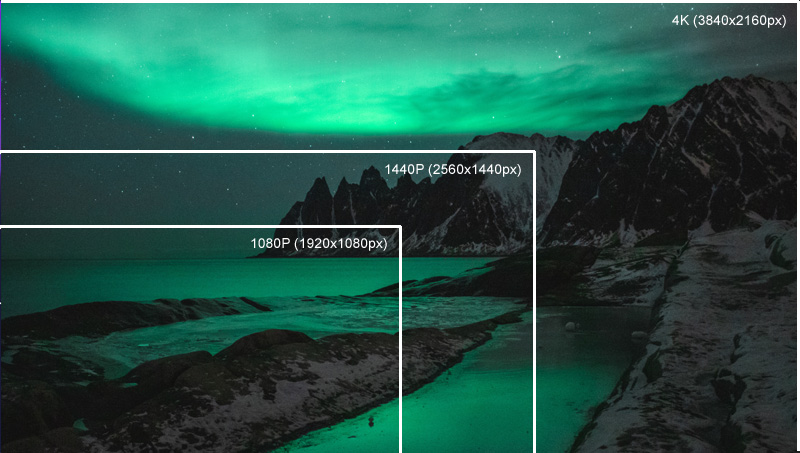 What is resolution and why should I care to know about it? The higher the resolution, the higher in density of pixels there will be. This means you’ll be able to see more of the image with more detail. The resolution is dependent on two things, the graphics card and the display or monitor. In general, you will mainly want to concern yourself with 3 main resolutions: 1080p or 1920x1080 pixels/resolution, 1440p or 2560x1440 pixels resolution, and 4K or 3840x2160 pixels/resolution. Why these three resolutions? These are currently the standard resolutions most PC games will be played at or benchmarked at. It’s also the target resolutions you will see supported on monitors. Knowing the monitor that you have and its resolution capability is a good first start to know what resolution you’ll be using. If you plan to upgrade your monitor later, you can also use it for consideration as to what GPU will work best for you.

For the ZOTAC GAMING GeForce RTX 30 series line-up, you can consider the following as a base to get started on which GPU is better for you:

What is refresh rate and why should I care? The refresh rate, measured in Hertz (Hz) mainly applies to the display/monitor. The higher the refresh rate a monitor can support, the smoother the graphics will look and feel. Of course, you will also need a dedicated graphics card to support the higher refresh rates to get that silky smooth look. You can find monitors supporting 30Hz, 60Hz, 75Hz, 90Hz, 120Hz, 144Hz, 175Hz, 240Hz, and 360Hz refresh rates. If you use an HDMI connection to the display, it can support refresh rates up to 120Hz (HDMI 2.1 spec). DisplayPort connections can support up to 360Hz. Keep in mind that you will also need to use a correct cable. Generally, you will want to use the latest version of the cable spec. So for HDMI, its version 2.1 and for DisplayPort, its 1.4. Just be sure to check the cable details before buying. For example, if you use an older DisplayPort cable and you switch the display setting to a 144Hz refresh rate, you will either get a black screen or constant flickering. This is usually due to the cable not being able to support it and swapping with a newer spec’d cable will fix.

What is FPS and why should I care? FPS stands for Frames Per Second. It’s a common measurement of a PC game’s performance and it’s dependent on the game and GPU hardware. Newer games take advantage of the newer technologies in current GPUs and it can cause an older GPU to not keep up, causing lower FPS in games. It also depends on the resolution you are playing at in the game. The GPU may handle a 1080p resolution and give you 90FPS on the game, but may struggle if you play at a higher resolution. For example, you set the game to play at 4K resolution but you only get 18FPS. You can also adjust other factors such as game details and effects lower to achieve a higher FPS but sacrifice detail and visual quality. Typically, the standard average among players today is to be around 60FPS for the best PC gaming experience. You may also achieve better FPS when playing older game titles at higher resolutions using the most current GPU.